Big Ass Fan (BAF) and MAKO are the leading players in the HVLS fan segment in the Philippines. We took the liberty of pitting a similar fan model versus our own. In most basic specifications, these fans are the same. They share the same diameter and power. Both fans also use 2 horse power motors.

The big difference between Big Ass Fan and MAKO is in the blade design. MAKO uses fewer blades compared to Big Ass Fan. If we try to look at the air flow, we can see that even with a fewer number of blades, the MAKO QD Series performs better than Big Ass Fan’s Powerfoil X2.0.

Airflow performance does NOT depend on the number of blades. More blades do not mean better airflow. The secret is in the design of the blade; MAKO’s unique patented blade design has a complex contoured shape that varies along its length. The shape, not the number of blades generates the huge volume of air movement. MAKO’s patented blade design is so efficient that even the 2-blade series (DL) outperforms Big Ass Fan’s 10 blades.

Another significant difference is the hanging weight of these two fans. MAKO is significantly lighter because of the lesser number of blades. They are easier to install and maintain. On the other hand, Big Ass Fan’s hanging weight of 190 kg may require additional structural support in some applications, structural engineering support is often recommended. 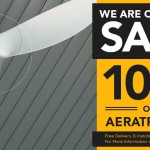 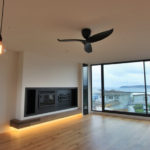